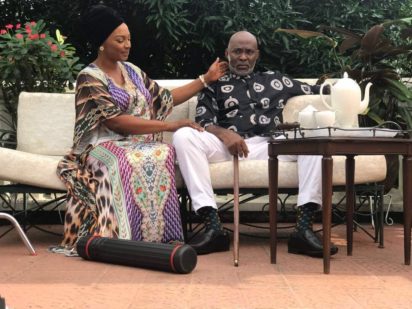 At a time when the Moral and ethical standards of our society are being heavily influenced by entertainment, and we see the Church struggling to be part of the conversation among young people, Heart In Motion (HIM) studios brings an inspirational movie which looks at family and faith through the lens of an unconventional encounter with God in this modern age.

When Sade, the central character suffers a personal tragedy, she is taken on a journey of self-discovery and faith which transforms the lives all those around her. ‘God Calling’ shines a spotlight on modern day spirituality by imaginatively exploring what it might look like for Abraham or Prophet Elijah to be Nigerian in 2018, and have to contend with disbelief as well as modern-day realities such as smart-phones and social media.

Written and directed by BB Sasore, creator of Before 30 and Banana Island Ghost, God Calling is set for release in cinemas this December 21st. The film features a stellar cast made up of Zainab Balogun, Karibi Fubara, Richard Mofe-Damijo, Onyeka Onwenu, Nkem Owoh, Tina Mba, Patrick Diabuah, Chidinma Okebalama (Chee), Eku Edewor, and a host of others.

Speaking on his inspiration for the movie, Sasore stated: “As a filmmaker,I considered how the world is looking to our continent for original stories, and how the Bible is filled with the most original stories that we each experience in our own way every day. It led me to think of how religion would adapt to time and geography, and this is what birthed ‘God Calling’.”

“I think our film industry has so much potential but lacks the infrastructure and resources to compete globally. I believe the faith-based genre could do for Nollywood what martial arts did for Oriental Asia, or romance did for India.” he said.

According to analysts, the Nigerian film industry remains a dominant player within the arts and entertainment sector which has grown rapidly over the past two decades, and needs to be increasingly supported as one of the country’s largest non-oil exports.

We have 37 guests and no members online