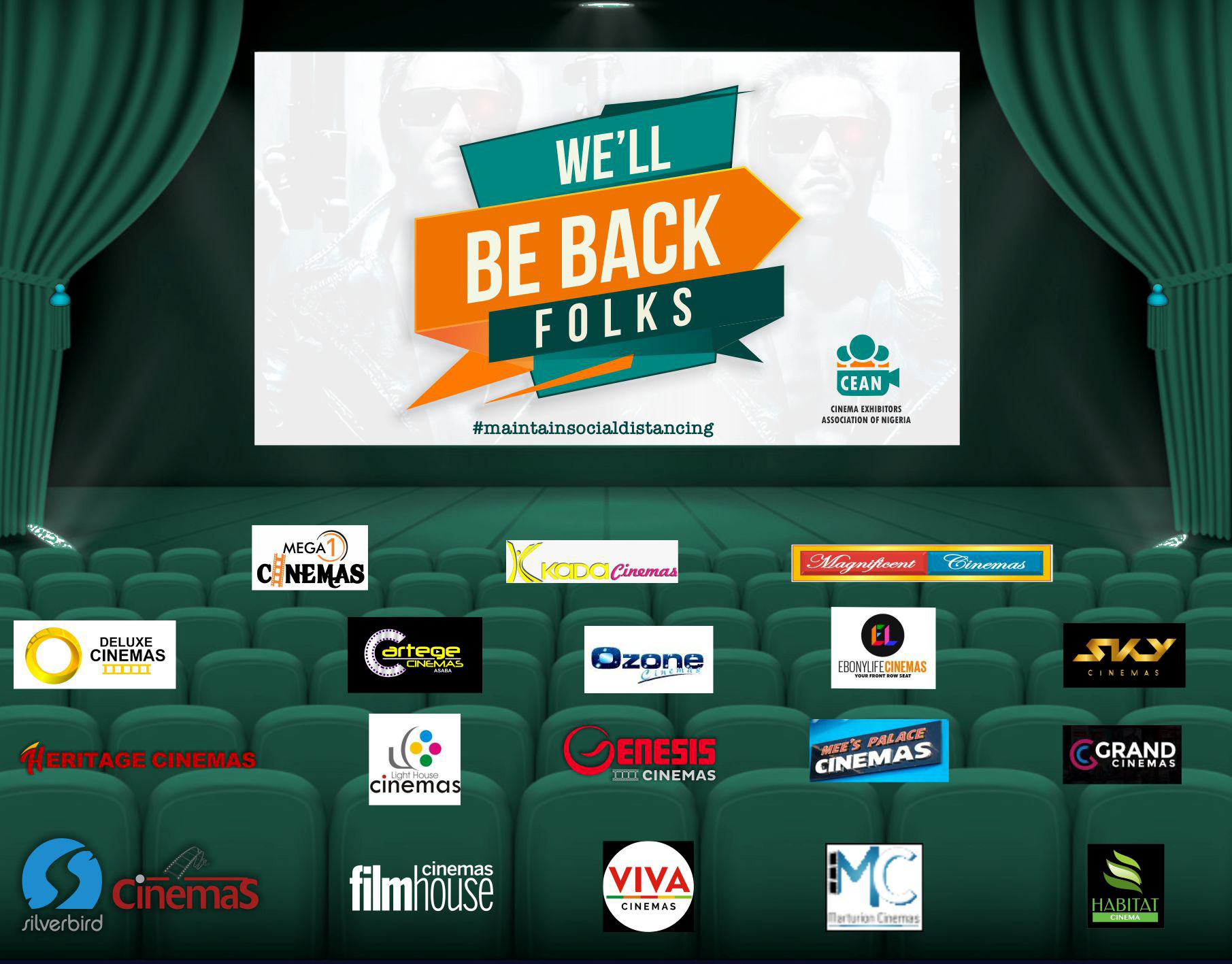 Nigeria’s cinema sector is perhaps, the most evolving in the nation’s creative industry, as movie-going has become a norm amongst many working-class youths and millennials in the recent past. In metropolitan cities such as Lagos, Abuja and Port Harcourt, the usual #TGIF aura on Fridays is commonly dominated by scenarios of young corporate workers, couples and students, storming cinemas as soon as the clock ticks to call it a day.

Unfortunately, like several other happy moments, the global pandemic has attempted to push all that into an archive, forcing the shutdown of cinemas across the country; depriving moviegoers of their choicest form of relaxation and denying cinema workers of the jobs they treasure and excitingly look forward to every day. One may ask - How are Nigerian cinemas reacting to this? What are they doing to successfully emerge out of this crisis?

Noteworthy is the fact that considering the nation’s private sector reaction to the pandemic, the cinema industry could be seen as one of the most proactive. Nigerian cinemas were quick to follow the practice of their counterparts in Europe and the United States, by reducing capacities in theatres to allow for social distancing, even before governments (beginning with Lagos State) gave their directives. Also, when the cases of affected persons began to increase exponentially and the governments ordered the shutdown, cinemas were quick to comply before many other businesses. These actions connote a high sense of responsibility of business owners within the industry and show their commitment towards sustaining the sector.

As a result of the halt, several movies selling at the box office were suspended while others scheduled for release were postponed. Generally, the film calendar has experienced much reshuffling with Hollywood blockbusters such as Mulan, No Time To Die, Wonder Woman 1984 and Black Widow amongst others, getting later release dates in the year, while the likes of Fast and Furious 9 and Eternals are now billed for release in 2021. For Nollywood, films such as Mama Drama, Unroyal and Soft Work had to be suspended and would have to be released again when cinemas resume. Likewise, Toyin Abraham’s Fate of Alakada, as well as Kambili (both directed by Kayode Kasum), slated for April and May respectively, have now been moved till further notice. The same is the case for Going Bananas, 2 Weeks in Lagos, Lemonade and The Good Husband, to mention a few. This infers that there will be a cluster of films hitting the box office towards the third and fourth quarters, providing moviegoers a variety to choose from. Hence, revenue performances for films will largely depend on the quality of content, demand necessitating longevity at the box office, as well as alternative release windows.

Recently, Nigerian film distributors have opted for VOD platforms such as Netflix and Amazon Prime to extend revenue streams for some Nollywood films released towards the end of 2019. We have seen the likes of Love is War and Living in Bondage: Breaking Free soar on Netflix. Ancillary platforms have undoubtedly provided an option for film lovers at this time, featuring several original films and having some Hollywood studios opt for them as an option to limit their loss of revenue. For instance, Disney’s Artemis Fowl originally schedule for release in theatres on 29th May, will now be released on 12th June via Disney+.

Some market analysts bother that ancillary platforms may prove to become a long term alternative to cinemas, and possibly contest with them for preference by studios and independent producers. However, in ascertaining the possibility of such a position, one may need to consider various factors that determine the consumption of film contents in cinemas and on VODs, some of which include production budget and technology. Questions such as these may arise – Would a studio such as Disney, spend $356 million to produce a film (like they did with Avengers: Endgame) and then release it via VODs? How many streams would earn studios as much as $1 billion? How would studios successfully combat easy piracy? Can VODs deliver the technologies and experience that are provided by premium cinemas, which creates the machinery for these huge box office numbers?

To ascertain the rate of preference of cinemas by film lovers and to get opinions regarding film choices, the Cinema Exhibitors Association of Nigeria (CEAN) recently carried out a survey, which was widely responded to by over 1,000 film lovers from 12 states (where cinemas are located). According to the responses, a whopping 95% of film lovers miss going to cinemas, out of which 88% emphasized that they specifically miss the cinematic experience. 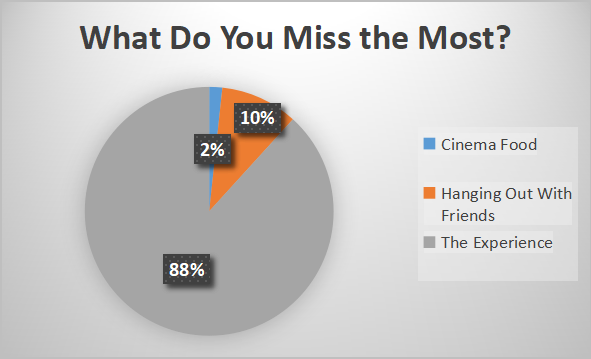 When asked about their willingness to return to cinemas after the lockdown, and with adequate safety measures in place, 68% were affirmative while 22% were skeptical. 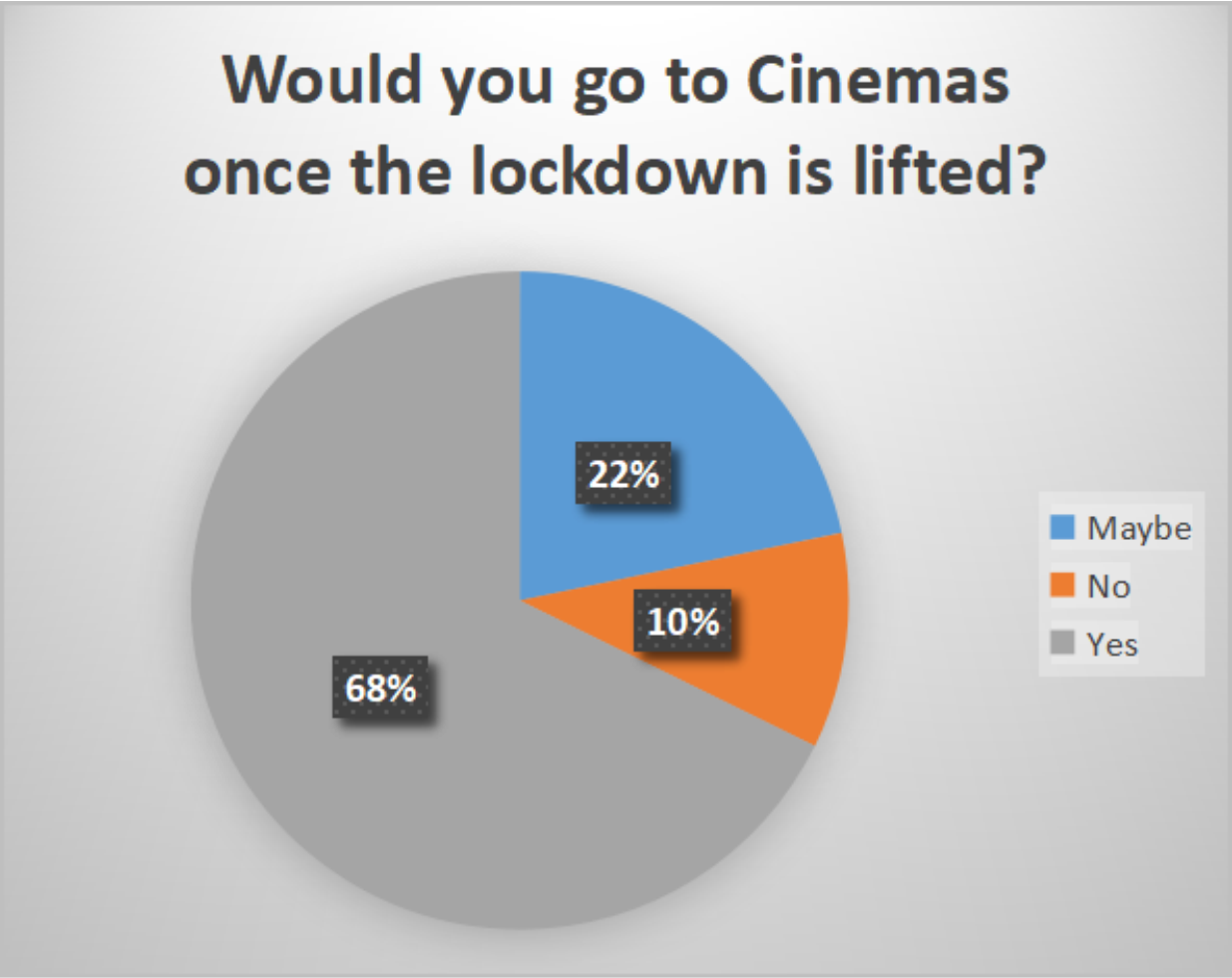 However, in Lagos and Abuja, uncertainty was seen to be a bit higher at 27% and 38% respectively, which could be attributed to the severity of the pandemic in those states.

The Cinema Exhibitors Association of Nigeria, alongside its member cinemas, have utilized their various social media platforms to keep movie-goers abreast of developments in the film world, using trailers, posters, trivia, social media campaigns and several digital tools. They have also educated the public on safety precautions that would guide movie-going POST-COVID-19, some of which are, mandatory temperature checks and use of face masks, coordinated social distancing on foyers and auditoriums and deep cleaning of auditoriums after every show, to mention a few.

Recently, there has been good news of cinemas reopening in different parts of the world, in countries such as Czech Republic, Finland, South Korea and China (partial opening).  As health workers and scientists keep striving to put an end to the ravage of the pandemic, one can only hope and pray for their success, while Nigerian cinemas join the rest of the global cinema industry in preparations, to ensure that cinema auditoriums serve as the perfect escape from this terrifying season.

We have 89 guests and no members online